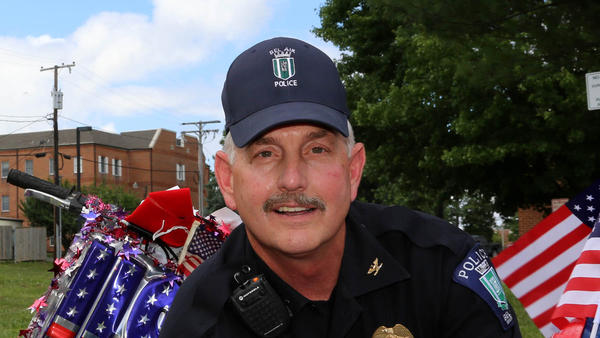 We regret to inform you of the death of Chief Leo F. Matrangola of the Bel Air Police Department on July 12, 2015.  Our thoughts and prayers are with Leo’s family and friends at this difficult time.  The following obituary information has been reprinted from the McComas Funeral Home website.
Leo F. Matrangola “Chief”, 62, had a strong finish after his brave battle with leukemia. He passed away on his terms surrounded by loved ones on July 12, 2015 at his home in Street, MD. Born in Cape May County, NJ, he was the son of the late Francis Joseph and Mary Ulicia (Souders) Matrangola who moved their young family to Harford County where Leo made his life long home with the love of his life Diane and their son Geoffrey. In his youth he was an athlete who enjoyed playing and coaching basketball, football, and lacrosse and later enjoyed the sports of fishing and kayaking.
Leo’s passion was to serve his community. He entered the Baltimore County Police Department as a cadet in September 1970. While serving as a law enforcement officer, he earned his Bachelor of Science from Towson State University (1981), graduated from the FBI National Academy in 1985, and completed his master’s degree from University of Baltimore in 1989. Upon his retirement from Baltimore County in 1991 as a Lieutenant, Leo started his second career in law enforcement as Chief of Police for the town of Bel Air, Maryland. He served in his hometown for the next 24 years until his second retirement on July 3, 2015. Leo aka “Grumps” was a leader and mentor to countless people who will carry on his service.
Leo’s greatest love was that for his family and his hilltop home. He cherished time on the farm with friends and family who enjoyed beautiful views, horses, dogs, cats, ATV rides, and spending time together on the back porch.
Chief Matrangola is survived by his wife Diane Matrangola, son Geoffrey Leo, daughter-in-law Dede, and his granddaughters Kaytin (15) and Hannah (13) of Columbia, MD as well as siblings, Paul Matrangola (Esther) of Bel Air, Peter Matrangola (Missy) PA, Angela Larkin (Paul) of NC, Theresa Raker (Doug) of FL and Gemma Regan (Mike) of IN.
A memorial service will be held at Bel Air High School, 100 Heighe Street, Bel Air, MD 21014 on Saturday, August 22, 2015 at 1:00 PM
As Leo was an active board member and supporter of many community charities, the family would prefer donations, in lieu of flowers, to any of the following three organizations: SARC of Harford County, PO Box 1207, Bel Air, MD 21014; Mann House, Inc., 14 Williams St., Bel Air, MD 21014; or Boys & Girls Clubs of Harford County, PO Box 1106, Aberdeen, MD 21001.