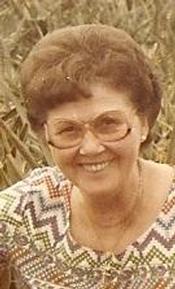 We regret to inform you of the death of Catherine Anna Vecera, mother of Retired Sergeant Richard Vecera, on March 15, 2013.  Our thoughts and prayers are with the Vecera family at this difficult time.  The following obituary has been reproduced from the Eckhardt Funeral Chapel website.

She was a home maker. She enjoyed flowers, gardening, and spending time with her grandchildren.

Surviving are her children Frank William Vecera, Jr. and wife Cheryl of Westminster and Richard A. Vecera and wife Debbie; her grandchildren Frank Vecera, III, Robert Vecera, Sandra Vecera, and Melissa Vecera; her 2 great grandchildren; and her sister Nora Reed.

The family will receive friends 3 to 5 and 7 to 9 p.m. Monday at Eckhardt Funeral Chapel, P.A., 3296 Charmil Drive, Manchester where a funeral service will be held 11 a.m. Tuesday with the Rev. Melvina Stricklin officiating.

Interment will be in Parkwood Cemetery, Baltimore.

In lieu of flowers, memorial contributions may be made to the charity ones choice.

Online condolences may be offered at www.eckhardtfuneralchapel.com.